Divorce and Venue: Where Do You File For A Divorce?

As Augusta, GA divorce lawyers, we often receive calls from folks wanting to know where they must go in order to file for a divorce in Georgia.﻿  In other words, do you know the general rule concerning venue, or the proper county or place where you should file, in this state?
The simple answer is that, generally, a party seeking a divorce must file in the county in which the defendant lives, (unless the defendant lived in your county and left it within six months before you file).  Another exception to this general rule is that your worthless spouse, "Sluggo," may sign a document prepared by your divorce attorney, in which he waives, or gives up, the right to be sued for divorce in the county to which he has moved.  In such case, your divorce attorney may file for divorce in your county, instead of his.
As to venue, like all other questions about your divorce, it is important that you discuss such matters with your own divorce lawyer!  And be rest assured that your divorce attorney will know how to get Sluggo served with divorce papers! 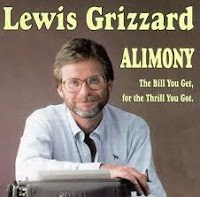 The late, great Southern humorist, Lewis Grizzard, a "great American," was well known for his astute observations about yankees who come South and wear out their welcome here!  As Lewis would put it, if ya'll yankees don't like our grits, or the way we talk, then "Delta is ready when you are!"
Lewis was also an astute observer about the human condition, including many witty observations, (in many of his 25 best-selling books), about the subject of divorce.  You see, Lewis probably felt like he was an expert on the subject, because, as the above book title about alimony suggests, he had been there and done that!
Lewis also once said that he believed in women's liberation.  After all, as he concluded, over the years, he had "liberated" two women!
Posted by Richard at 8:49 AM No comments:

I just read another blogger's post in which that blogger, (who will not be identified here), expressed an opinion that no-fault divorces are a bad thing.  In other words, that blogger believes that it should be more difficult for people to get a divorce.  I assume that blogger probably also believes that divorce is morally wrong.  What do you think?
As for me, obviously, since I am an Augusta, Georgia divorce lawyer, I support  Georgia's law which makes it relatively easy to get a divorce in this state without having to prove a fault ground, such as adultery, addiction, or cruel treatment.  In Georgia, a person must simply allege that the marriage is "irretrievably broken."  In short, he or she will then be entitled to get a divorce without having to allege or prove any fault grounds.
It is not that I necessarily view divorce as a "good thing." No one really believes that.  However, I would hate to see our state make it more difficult for a woman to get out of a violent, abusive marriage.  In other words, in my opinion, no one should be forced to stay in an abusive relationship just because they cannot prove adultery, or another fault ground.
In addition, I believe that Georgia courts should not be unduly expensive for folks who cannot afford contested divorces, which can cost thousands of dollars, (in contrast to much cheaper simple, uncontested divorces).  For instance, as divorce attorneys at the Goolsby Law Firm, LLC, in Augusta, GA, we often handle simple, uncontested divorces, with children, for as low as $500, plus costs.  Even then, we often see folks who struggle to afford it.  Justice should not only be for the wealthy!  Laws allowing relatively easy, cheap no-fault divorces are therefore necessary, in my opinion.
What is your opinion?
Posted by Richard at 4:15 PM 2 comments:

Did you hear the latest Hollywood news?  According to various news reports,﻿ a California judge has signed documents which will grant a divorce filed late last year by British comedian Russell Brand from a talented American singer, Katy Perry.
Technically, it appears that, under California divorce law, the divorce may not be final for another six months.  But, according to news reports, at least the divorce terms have been approved.  Coincidentally, Katy's new hit single is entitled, "The One That Got Away."
While, over the years, there have been many celebrity marriage success stories, this appears to be another example of how Hollywood careers can really put stress on celebrity marriages.  Here's hoping that they both have moved on and that they will find happiness and continued success in their respective careers.
Posted by Richard at 5:25 PM No comments:

As divorce lawyers in Augusta, Georgia, we sometimes see, firsthand, in our divorce cases, the tragic results of family violence.  As a former career prosecutor, I prosecuted many cases involving domestic abuse.  Here, in Augusta, this past week, our community experienced a tragic loss of a 21 year old woman who was found dead in her apartment.  Police reportedly believe this young woman, Cayce Vice, is yet another tragic victim of domestic violence.  A prayer vigil was held by family and friends to remember her life.
We should likewise remember all the victims of family violence around the country.  According to Futures Without Violence, three women are murdered, on average, each day in this country by their husbands or boy friends.  Also, according to the Department of Justice, about 3.4 million people, mostly women, are the victims of stalking each year.
But that's enough about statistics.  Let us remember that these numbers are actually real people with families and friends -- like Cayce Vice -- who deserved to live and be left alone, but who are victims of these horrible crimes.
Posted by Richard at 4:53 PM 1 comment: